The C4-LU642D is a full-featured model for smaller projects. This model is capable of distributing six HDMI 4K Ultra HD sources to six zones—four utilizing HDBaseT Class A technology and two additional zones via local HDMI outputs. The integrated audio matrix can route audio extracted from the 10 HDMI sources and eight independent coaxial digital inputs to any of the HDBaseT or HDMI outputs and 8 analog audio outputs with variable volume, bass and treble controls as well as audio delay for lip sync correction. Featuring an integrated Ethernet switch, the LAN port on the C4-LU642D provides an Ethernet connection to up to four C4-LU1E HDBaseT Receivers. Fast switching times are achieved thanks to the Control4 advanced EDID management system and EZ-Calibration. Zone Lock technology ensures home theater and media rooms are able to take full advantage of the latest 4K and 3D content.

The C4-LU642D is designed to be seamlessly integrated into a Control4 home automation system. The C4-LU642D introduces audio downmixing, offering greater flexibility in where and how you enjoy your media. The D model can downmix multichannel audio from any of the HDMI inputs to the HDMI, HDBaseT and stereo audio outputs, allowing you to hear your 4K sources anywhere in your home. All popular Dolby® and DTS® formats are supported, including Dolby Digital, Dolby Digital Plus, Dolby TrueHD (lossless), Dolby Atmos®, DTS-ES™, DTS-HD, and many others. 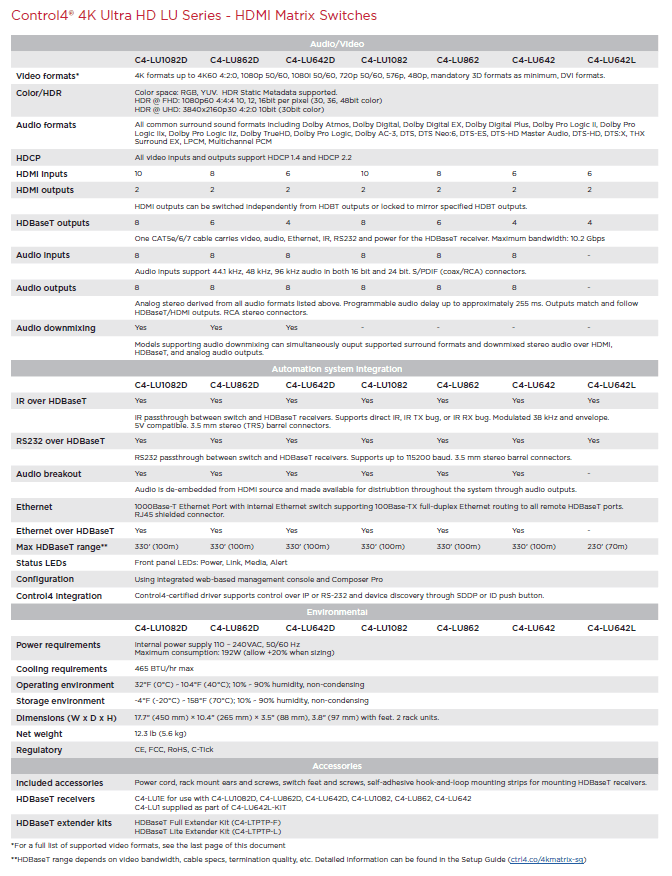